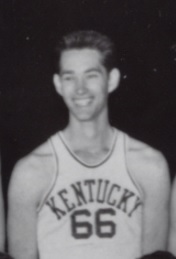 Born to William and Anna Layne in Oklahoma, Layne grew up in McKamie, Arkansas. After graduating from Stamps HS, he went to Magnolia A&M (now known as Southern Arkansas University) before transferring over to the University of Kentucky. After college, he played a couple season with the Wilkes-Barre Barons. After his basketball-playing days, he moved to Middlesboro, Kentucky, to work with a gas exploration company.


Stats:
Posted by Peach Basket Society at 5:10 AM