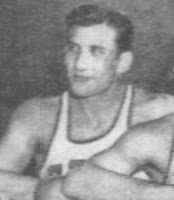 Chenetz played basketball at CCNY during the time of the point shaving scandal, but Chenetz was not involved in the fixing at all. Unfortunately, he was barred from athletics at the school due to the discovery that he and two other players had their high school transcripts altered to help them gain acceptance. This was overturned a year later after Chenetz had gone to play for the Middletown Guards while finishing his education at CCNY.


Stats:
Posted by Peach Basket Society at 4:29 AM