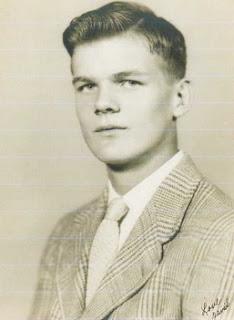 Born to Roy and Katie Miller in Salem, Virginia, Dave went into the U.S. Army at the tail end of World War 2. He would go to school first at Wake Forest, and later transferred to and played basketball at Alabama State TC and Livingston State TC. The 6'6 center was signed by the Syracuse Nationals in the summer of 1950 and was assigned to the Utica club in the ABL. He would work for many years as a salesma for Proctor and Gamble before dying of heart failure in 1981 at the age of 54.

He was married to Rachel Carbaugh and they had three sons and two daughters.

Stats:
Posted by Peach Basket Society at 9:59 AM