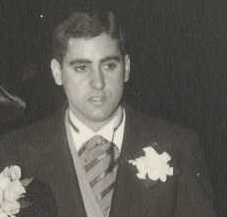 A graduate of the University of Toledo, Tubiolo played for the Elmira Colonels in the ABL in the 1951-52 season. He worked for a a few years as a grammar school teacher. He would go on to manage exhibition baseball tours and was also involve in setting up college football bowls games. He was a masterful promoter, and was an agent of sorts for college football players going into the draft, working with his own company, CIMCO, out of Washington, D.C. Sports leagues were hesitant to working with Tubiolo, likening his company to a players' union. He was one of the sports world's earliest agents, although he disliked that classification.

Joe married Virginia Ridgeway in 1953 and they had one son and three daughters.


Stats:
Posted by Peach Basket Society at 4:46 AM