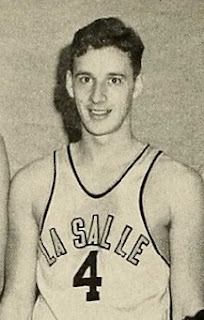 Born in Scranton to Henry and Margaret Janiszewski, Gene enrolled at La Salle after serving in the military during World War 2, but transferred at the beginning of his sophomore school year to Mount St. Mary's. He was eventually eligible to play by the end of the 1948-49 campaign. The 6'5 center was the captain of the basketball team at MSM in his junior and senior year, and played with the Washington Capitols in 1951-52. He moved to Anchorage, Alaska, shortly thereafter, playing on a few semi-pro teams up there.


Stats:
Posted by Peach Basket Society at 4:09 AM