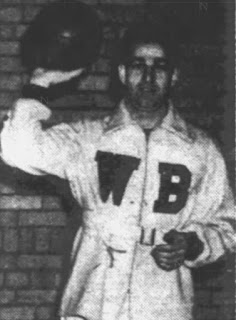 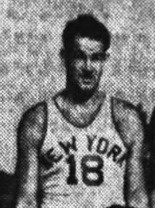 Born to Emilio (1885-1976) and Adeline (1887-1960) Colone. Colone served in the U.S. Army during World War 2. After playing pro basketball for five seasons, he moved to New Jersey where he was a junior high school teacher and coach until 1986. He also played minor league baseball from 1946-50, pitching at the B-level for mainly the Indians and Reds farm systems.

He and his wife, Genevieve, had four sons and a daughter.

There was another Joe Colone (Joseph J, four months younger than Joseph F.) in Berwick, roughly the same age as "Bells," which made research tricky. Joseph J. was a football player who went to Penn State. Sometimes newspapers referred to them as brothers, but two brothers named Joseph is unlikely unless your father is George Foreman, and 4 months apart in age is impossible. 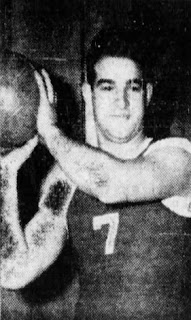 Stats:
http://www.basketball-reference.com/players/c/colonjo01.html
http://www.justsportsstats.com/basketballstatsindex.php?player_id=colonjo01
Posted by Peach Basket Society at 10:46 AM