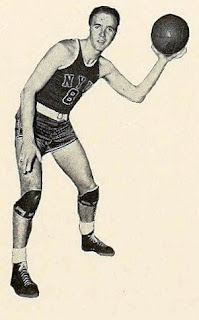 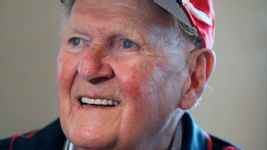 Lumpp served in the military during World War 2 and after the war starred at NYU, including setting the single-season scoring record for the school in his senior year. He then lead the U.S. Olympic team to the gold medal in the 1947 Olympic Games in London. Drafted by the Jets, Lumpp was traded to the Knicks in mid-season for Tommy Byrnes, and remained with the Knicks through 1952. After one season with the Bullets, Lumpp took an assistant coaching job back at NYU before taking over at the New York Athletic Club, where he stayed for many years.

Ray and his wife Anne had 2 sons and two daughters.

Stats:
http://www.basketball-reference.com/players/l/lumppra01.html
http://www.justsportsstats.com/basketballstatsindex.php?player_id=lumppra01
Posted by Peach Basket Society at 6:59 AM