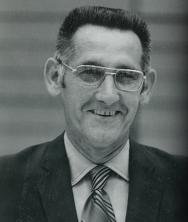 Dr. Wehr entered the U.S. Navy right out of high school, and during his naval training attended Indiana State, Rice and St. Mary's in California. He got his Bachelors Degree from Denison, his Masters from Pitt, and his Doctorate in Education from Florida State. His professional athletic career was brief, playing with the Jets and the Blues, but he spent many years as a teacher and coach in various high schools and college, primarily at Georgia State University, where he coached for three seasons, too.

He married Sally (Sara) Henderson in 1958 and they had two sons.

Stats:
http://www.basketball-reference.com/players/w/wehrdi01.html
http://www.justsportsstats.com/basketballstatsindex.php?player_id=wehrdi01
Posted by Peach Basket Society at 10:23 AM