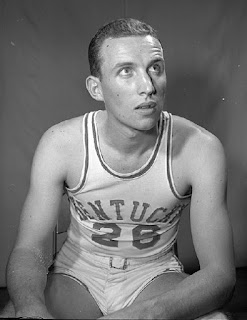 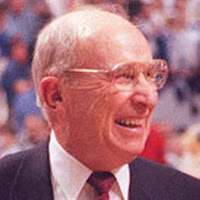 Rollins went to UK, but his time there was interrupted by his service in the U.S. Navy for World War 2. He returned to UK after the war, and as a member of Kentucky's "Fabulous Five" lead the Wildcats to the 1948 NCAA title. He then won a gold medal for the American basketball team in the 1948 Olympics before joining the Chicago Stags in the BAA. Kenny worked as a salesman for many years, retiring in 1986. He moved down to Florida in 1994 but returned to live with his son in Greencastle, where he died in 2012. His uniform number was retired by UK. His brother, Phil, also played in the NBA,

He and his wife, Mabel, had a son, Kevin, and a daughter, Corinne.

Stats:
http://www.basketball-reference.com/players/r/rollike01.html
http://www.justsportsstats.com/basketballstatsindex.php?player_id=rollike01
Posted by Peach Basket Society at 4:44 AM