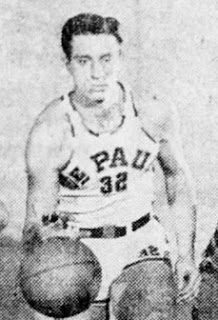 Ed followed his older brother George to DePaul, where they played on the 1944-45 NIT champion team. After graduating from DePaul (not sure where he was during 1945-46 season. Injured? Military?), he played for the Stags on his way to a six-year professional basketball career.
After his time in the NBA, Mikan was a successful housing contractor and also owned a bowling alley and a limousine service.

Mikan and his wife Mary (who passed away just under two months before Ed) had three sons and three daughters.

Stats:
http://www.basketball-reference.com/players/m/mikaned01.html
http://www.justsportsstats.com/basketballstatsindex.php?player_id=mikaned01
Posted by Peach Basket Society at 4:47 AM