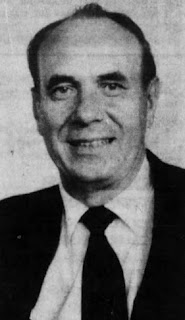 Kostecka enlisted in the U.S. Army in 1943 and served during World War 2 as an Intelligence Officer. He was General MacArthur's Russian interpreter and was one of the first troops to enter Nagasaki after the atomic bomb was dropped on the city in August of 1945. He returned to finish school at Georgetown and was kicked off the team in January of 1948 after a large disagreement with Coach Elmer Ripley. Kostecka played for the Jets for a season before rejoining the Army for the war in Korea. After the war, he entered business and was a general manager of a textile and an assistant vice-president of sales for a jewelry company. He was also employed by the CIA at this time. In 1965, he joined the Department of Commerce and was recognized by the International Franchise Association as the foremost expert in business franchising. Kostecka died of heart failure in 2007.


He and his wife, Maria, were married in 1958 and they had two sons, Robert and Andrew, Jr. His grandson, Andrew Kostecka III, is currently (as of this posting) a freshman on the basketball team at Loyola University in  Maryland.

Stats:
http://www.basketball-reference.com/players/k/kostean01.html
http://www.justsportsstats.com/basketballstatsindex.php?player_id=kostean01
Posted by Peach Basket Society at 5:36 AM