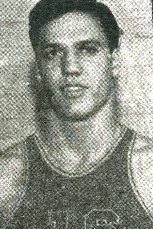 Bill was born to Claude and Josephine Henry in Dallas, Texas. At Rice, he was a star of the basketball team during World War 2.

The 6'8 220 pound Henry returned to Dallas after playing basketball professionally, where he was a successful businessman and civic leader.

Stats:
http://www.basketball-reference.com/players/h/henrybi01.html
http://www.justsportsstats.com/basketballstatsindex.php?player_id=henrybi01
Posted by Peach Basket Society at 6:55 AM