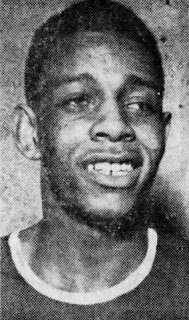 Knight was a very popular player in the Hartford area. Unable to go to college due to the difficulty at the time for black kids to go to college, Knight played semi-pro and pro basketball around Connecticut. He was a talented scorer, and he would eventually find his way to the NBA, playing a couple games for the Knicks in the 1954-55 season.

He was a generous and modest man, working with youths in Hartford for many years, volunteering at the local YMCA for years. He died in 2008 at 79 years of age.

Posted by Peach Basket Society at 5:19 AM