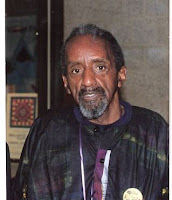 One of the first black players in the ABL, Wilcox, born in Youngstown, Ohio, would eventually move to Harlem where we would become a key figure in the Civil Rights Movement in the United States in the 1960's. He was a popular speaker and leader in the Harlem community, and would often work with Malcolm X on various black issues. His main focus was on education, working to maintain a high level of education not just in school in predominately-black Harlem, but in other black neighborhoods elsewhere in the country. He had gotten his Masters Degree from Columbia in 1956, and taught there for many years. He founded Afram Associates in 1968 which collected at cataloged thousands of sources of black history and culture for future citizens to read, review and learn. In 1970, he was seriously injured in an auto accident. He had fractures in his spine, and his recovery was slow and painful. He suffered from osteoporosis later in life.

Posted by Peach Basket Society at 10:53 AM