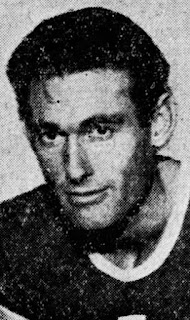 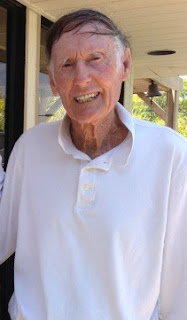 Sherman was a basketball and track star at Santa Barbara State College (now UCSB), with his education interrupted by World War 2 and his three years in the Merchant Marines. He played pro basketball after graduating, but would take up tennis and become a very talented player. He played at Wimbledon twice, and won 95 singles titles and 30 doubles titles, the most total wins in UTSA history. He defeated famous players such as Bobby Riggs. He won his last title at the age of 93. In December of 2016, Sherman fell at his home and hit his head. About a week later, he succumbed to his injuries.

Sherman was competing in the USTA Seniors Clay Court Tournament in Arlington, Virginia, on the morning of September 11, 2001, when a low-flying plane passed over the courts, disrupting play. About 10 seconds later, that plane, American Airlines Flight 77, crashed into the Pentagon.

Posted by Peach Basket Society at 9:13 AM

Email ThisBlogThis!Share to TwitterShare to FacebookShare to Pinterest
Labels: 1947-48, Hartford Hurricanes, over 90