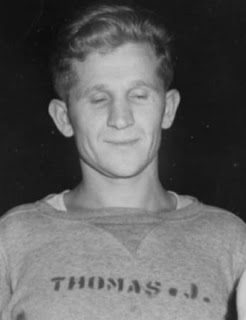 How to find a guy with such a common name?

Knowing that he went to the University of Scranton, I was able to locate a questionnaire he filled out in his senior year that listed his address in Scranton (3317 Pittston) and that he was born in 1919. A search of old Scranton city directories showed a Mary and Frank Thomas living there in 1949. Turns out Frank is his brother (born March 22, 1917) and Mary was his mother. His father, Frank (born 1886) died in 1947. With this information, I was able to search census records and narrow it down


The 5'8, 155-pound player enlisted in the army in January of 1943. He played a couple seasons of pro basketball as well as assistant coaching at his alma mater.

Posted by Peach Basket Society at 9:15 AM