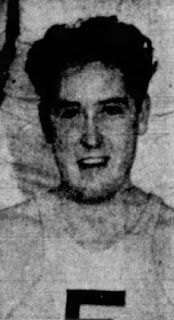 After graduating from Central HS, Steve served in the U.S. Army Air Corps as a surgical technician during World War 2. After the war, he joined his brother Bill to play for the Wilkes-Barre Barons. Steve was a very popular player for the Barons in his five years with the club. A back injury in 1951 ended his playing career. He would return 9 years later as the team's coach, even playing in a game before being fired a month into the season. He was hired again to coach the Barons in 1964.

Steve was also a very talented golfer, and would coach the game at Luzerne County Community College. He suffered through various health ailments in his later years, losing part of his leg to gangrene, two heart bypasses and a broken neck. He had just turned 82 when he died in 2000.

Steve was a long-time teammate with his brother Bill and they were a high-scoring tandem for the Barons.

Steve had two sons and a daughter.

Posted by Peach Basket Society at 5:28 AM