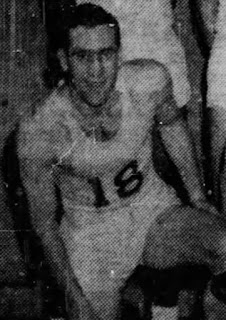 I was looking into Philadelphia-native basketball player Bink Manning, seeing if I could identify him. He went to Overbrook HS in Philly and attended Brown Prep before a length semi-pro career around the Pennsylvania with an interruption by World War 2. He had seen him referred to as Bink, Dink and Bill, but mostly as Bink. Then I saw an article about the Lancaster Roses who signed him and referred to him as W. G. Manning. Since he has been referred to as Bill, I decided to look into William Mannings from Philadelphia and found William Green Manning, who was born in 1921. This Manning served in the army at the same time as Bink Manning and was 6' in height which fits the information I have on his height. Not conclusive, but I felt pretty good about it. I then looked a little further and found W.G. Manning's obituary and although it doesn't mention basketball, it does mention his time in World War 2 as well as his education at Overbrook HS and Brown Prep. Another successful identification!

Manning worked for many years in construction before dying in 1986. He and his wife, Helen, had three daughters.


Posted by Peach Basket Society at 9:38 AM