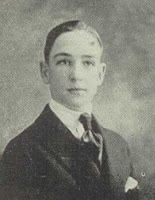 Born in Canada and raised in Gary, Indiana, Sibley was the captain of the football team at Indiana University and would later play some professional basketball. Sibley would later operated service stations in Logansport and Marion, Indiana

He married Ione Nixon in 1928 and they had three sons and a daughter.

Posted by Peach Basket Society at 6:59 AM