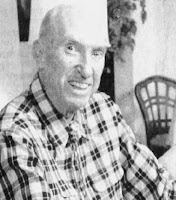 From Marion, Indiana, "Stretch" was one of the game's first big men, at a time with most coaches stayed away from tall players due to their overall lack of athletic grace. the 6'7 Murphy changed that while at Purdue. He played with the Bruins of the ABL for one game, as well as other Midwestern teams over the early 1930's  He would go get his Master's Degree in Phys Ed at Columbia University. He was elected to the Hall of Fame in 1960.

He and his wife, Ruth, were married just short of 62 years.