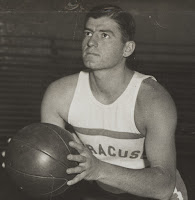 
Wineapple was a pitcher as well as a basketball player. After graduating from Salem HS in Massachusetts, where he once scored all 57 points in his school's 57-0 rout of a rival HS, he went to Syracuse where he would play basketball and baseball in his freshmen year. He transferred to Providence College, and was the only Jewish player on the team. His senior year, he became the first Jewish athlete to be named basketball All-American. He was signed by the Washington Senators after graduating from Providence and pitched in one game for them, throwing four innings against Detroit on September 15, 1929. He would bounce around the minor leagues through 1935, never again making it back to the majors. His professional basketball career was brief, with stops in Syracuse and Miami.

Ed and his wife Maxine had a son and a daughter.

Stats:
http://probasketballencyclopedia.com/player/eddie-wineapple/
Posted by Peach Basket Society at 5:37 AM

Email ThisBlogThis!Share to TwitterShare to FacebookShare to Pinterest
Labels: 1929-30, MLB, over 90, Syracuse All-Americans