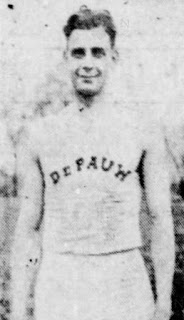 Sturtridge played football and basketball at DePauw, and played for parts of two seasons with the Chicago Bears in the NFL. On February 11, 1929, Dick was pressed into duty with the Chicago Bruins of the ABL. The Bruins were owned by Bears' owner George Halas.

Posted by Peach Basket Society at 10:04 AM