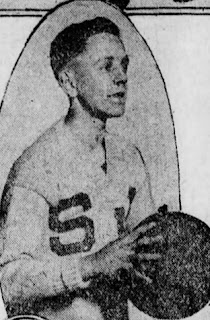 From Brooklyn, Stuchury played around his hometown until he was signed by the Detroit Cardinals in the ABL in 1927. When the team disbanded halfway into the season, Stuchbury was out but would return to the ABL in 1929. He played in the New York area a bit on and off through 1938.

His name is spelled "Stuchberry" in some sources.

Posted by Peach Basket Society at 7:53 AM