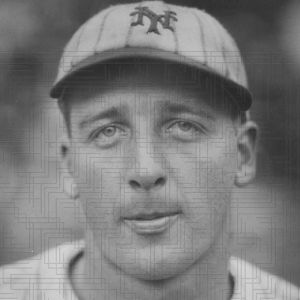 A baseball and basketball player at Penn State, Koehler joined up with the well-known Morrys out of Pittsburgh. He managed to sign with John McGraw's New York Giants in 1925, going right to the major leagues after a good showing in spring training. After playing one game with the Giants, he was farmed out to Reading in the American Association. He would return to the Giants later that season, but was let go at the end of the season. He would play professional basketball through 1942, but would never make it back to he major leagues. During this time, he would continue to play professional basketball through 1938. He would later work as a baseball scout in the Pacific Northwest for the Cincinnati Reds before dying of a heart attack.

Pip and his wife, Corrine, had one son.

Posted by Peach Basket Society at 9:37 AM