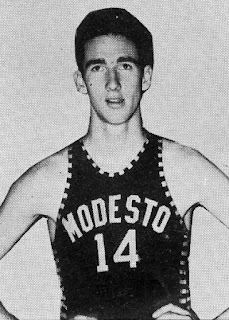 Livingstone went from Modesto Junior College to St Mary's, and joined the Oakland Bittners in 1947 in time for the AAU tournament. He left college to play for the Denver Nuggets in the western version of the ABL, which was essentially a semi-pro league of teams that would later compete in the AAU tournament. He returned to college to player for the University of Wyoming and was drafted by the Baltimore Bullets in the NBA. Barely a month into the season, the Bullets traded Livingstone to Philadelphia in exchange for Ed Sadowski.

Posted by Peach Basket Society at 4:37 AM