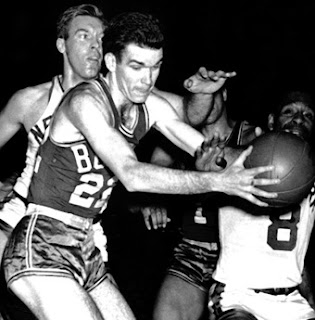 Born in St Louis, Ed Macauley had outgrown his bassinet at two weeks of age. His parents arranged for him to skip the third grade due to his height, and by the time he finished high school he was heavily recruited by college basketball coaches. (He could not play in 9th grade because the sport clashed with his typing class). His mother told him he can go to any school he wanted, so long as it was a Catholic school and was in St Louis. The pretty much meant he could only attend St. Louis Univesity. After lighting up the court at St Louis, Macauley was drafted by the financially-troubled Bombers. Hoping the local star would boost attendance enough to keep the team afloat, the Bombers folded after the season, and Macauley's contract was picked up by the Celtics. After six stellar seasons in Boston, the All-Star Macauley was traded by the Celtics (along with Cliff Hagan) for a player the St Louis Hawks had just drafted: a man from the University of San Francisco named Bill Russell. After two seasons with the Hawks, Macauley was named head coach in 1958, and after the 1958-59 season, he retired from playing and coached the Hawks one more season. He was elected to the Naismith Hall of Fame in 1960, at the time the youngest player ever inducted at age 32.

After retiring, he became and announcer and an author, and would later become a deacon for the Roman Catholic Church in St Louis.

He was married to Jacqueline Combs and they had two sons and three daughters.

Posted by Peach Basket Society at 4:58 AM