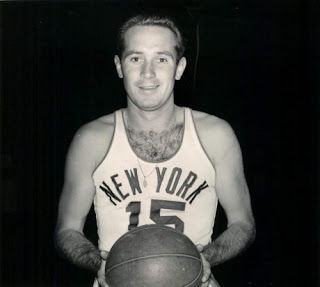 Following some outstanding play in his first year at St John's, McGuire suited up to serve his country, and played at Dartmouth as part of the V5 Training program late in the 1944 season. After the war, he returned to Dartmouth. A skilled passer, he moved on to play with the Knicks in the NBA for 8 seasons, before moving to the Detroit Pistons. In his third season with the Pistons, he became head coach as well as playing. He retired as a player in 1960, but stayed with the Piston for three more seasons at the helm. He was fired after the 1962-63 season, and in 1965 was hired to lead his old team, the Knicks. He lasted three seasons there before being fired a coach. He stayed on as a scout, and was named assistant coach in 1971. After retiring from coaching in 1978, he stayed on with the Knicks for many years in a scouting capacity. McGuire was elected to the Naismith Hall of Fame in 1993, joining his brother Al, legendary coach at Marquette University. A five-time All-Star who accumulated almost 3000 assists in his career, Dick died of an aortic aneurysm in 2010.

He and his wife, Teri, had four children.

Stats:
https://www.basketball-reference.com/players/m/mcguidi01.html
http://www.justsportsstats.com/basketballstatsindex.php?player_id=mcguidi01
Posted by Peach Basket Society at 11:12 AM