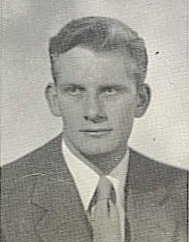 Born in Minneapolis to Owen and Margaret Pritchard. The 6'8 Pritchard played basketball at South High School before playing at Drake. He played one season for the Waterloo Hawks in the NBA, at least one year with the Harlem Globetrotters' opponent, the Washington Generals, and then multiple seasons in various Minneapolis church and municipal leagues. Later in life, he worked for years at a warehouse for Sears.

Posted by Peach Basket Society at 3:53 AM