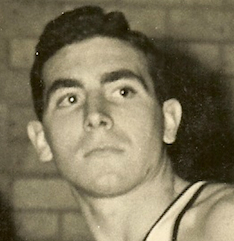 Born to Cordt and Ruth Otten, Mac graduated from Bellefontaine HS at enrolled at Bowling Green. He started on the basketball team, but World War 2 got in the way as Mac served in the U.S. Navy. After returning to BGSU, he went on to play two seasons in the NBA, including time with Tri-Cities with his older brother, Don Otten. He left basketball and worked for many years as an accountant.

He was married twice and had six children.

Stats:
https://www.basketball-reference.com/players/o/ottenma01.html
http://www.justsportsstats.com/basketballstatsindex.php?player_id=ottenma01
Posted by Peach Basket Society at 11:39 AM