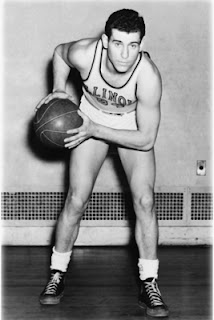 One of the greatest athletes to ever come out of the University of Illinois, Dike played football, basketball and competed in track in his four years there. He played in a Final Four and a Rose Bowl, and also was on the U.S. Olympic team in 1948, competing in the High Jump, winning a silver medal. After playing four years in the NBA, Dike would become a very popular fundraiser for the university.

He and his wife, Teddy, had one son and three daughters.

Posted by Peach Basket Society at 7:13 AM