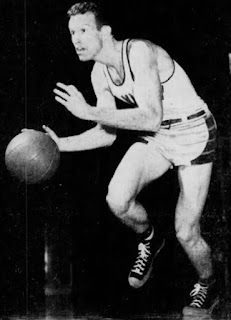 Owens went to Baylor and lead the team in scoring in his sophomore year (1947-48) but quit school after his junior season to go pro. He played three seasons professionally in the NBA and NPBL before returning to Baylor to finish his education. He then took an assistant coaching job at the University of Houston, and played some independent basketball before becoming a high school coach. An avid golfer, Red was later a golf pro in Houston.

Supposedly died in 1988, but I cannot find anything concrete to confirm that.


Stats:
https://www.basketball-reference.com/players/o/owensre01.html
http://www.justsportsstats.com/basketballstatsindex.php?player_id=owensre01
Posted by Peach Basket Society at 5:01 AM