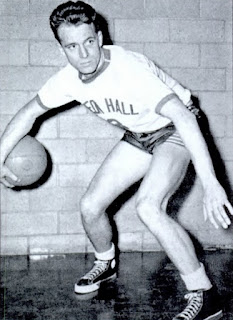 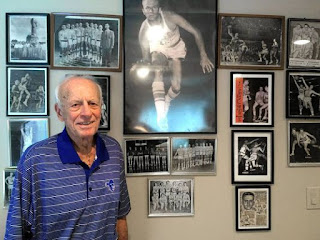 Frank "Pep" Saul was born in New Jersey and starred in basketball and baseball at Holy Trinity HS in Hackensack, New Jersey. Afte a year at Seton Hall Prep, he went to Seton Hall University in 1942, but after his freshman year went into the army. He was stationed in Hawaii, where he organized an 8-team military basketball league. After the war, he returned to SHU, where he became the first player from that school to score 1000 point. He went on the NBA, playing with the Royals, Bullets, Lakers and Hawks, and was a member of four NBA championship teams. He decided to retire from the court after a leg injury and return to New Jersey, where he worked as an insurance agent until retiring in 1994.

Pep was also a decent pitcher, and played semi-pro baseball during the basketball off-season, and also played professionally one year, in Ogdenburg, New York, going 13-5 with a 3.25 ERA.

He and his wife Mary were married in 1948 and they had four sons and four daughters.

Posted by Peach Basket Society at 7:08 AM