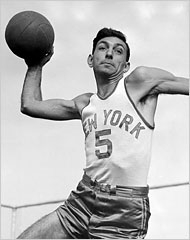 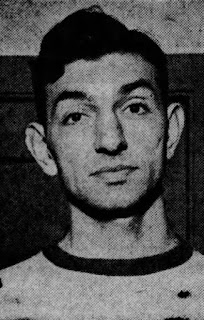 Born in the Bronx, Ralph starred on the court in high school before heading off to NYU. (Fellow BAA player Leo Gottlieb was a high school teammate.) He was drafted into the U.S. Army during World War 2, and after his discharge, played with the SPHA's in the ABL. He signed with the Knicks in 1946, but was traded to Philly shortly into the season.

Ralph died of kidney failure in 2009.

Stats:
http://www.basketball-reference.com/players/k/kaplora01.html
http://www.justsportsstats.com/basketballstatsindex.php?player_id=kaplora01
Posted by Peach Basket Society at 5:06 AM