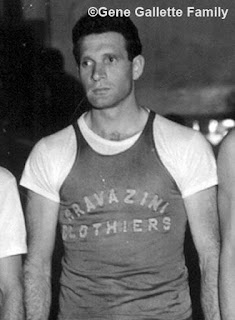 He allegedly went to St Mary's in California, but he does not appear on their all-time roster.

I can't find anything on this guy except his appearances in Washington Capitol games. (November 5, 1946 is the first one I found.)

No one I could find knew anything about this Gene Gillette who played for the Caps. I couldn't find much either when looking at the players of the 1946-47 season of the BAA, so I chalked him up as having "incomplete" information and moved on.

Months later, I was doing some research on basketball player Frank Kudelka, a player from the Bay Area. I happened to notice in a box score of one of Kudelka's basketball games while in the military that there was a player on a Coast Guard team named "Gallette." Noticing that "Gallette" is similar to the unknown Washington Capitols player "Gillette" and also from the Bay Area, I looked into this possibility of being Gillette. Gallette played for various teams around the Bay Area, but was he actually Gene Gillette?

And then I found this obituary from the San Mateo Times. 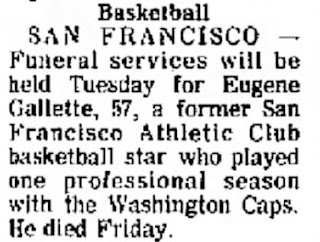 Looks like Gene Gallatte is the name of the mystery player, not Gene "Gillette."

I am going to take a second to pat myself on the back.

Born in San Francisco, Gallette worked at his father's business after high school and also played basketball in various recreation leagues and outfits around the Bay Area until the advent of World War 2. While serving in the Coast Guard and the Navy, Gallette continued playing while stationed in the Pacific. After the war, he played briefly for Washington in the BAA.

Posted by Peach Basket Society at 10:14 AM