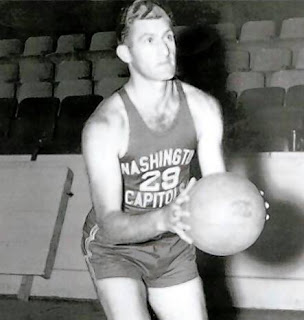 
Born in Newark, Goldfaden starred at GW before embarking on a professional basketball career, primarily in the ABL. After serving in the navy during World War 2, Ben played in two games for the BAA's Washington franchise before returning to the ABL. He quit basketball to teach junior high school, and later became an insurance agent and moved to Florida. He died on congestive heart failure a little over five months short of his 100th birthday.

Stats:
http://www.basketball-reference.com/players/g/goldfbe01.html
http://www.justsportsstats.com/basketballstatsindex.php?player_id=goldfbe01
Posted by Peach Basket Society at 11:56 AM