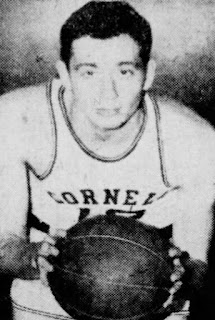 Nathan served in the U.S. Navy during World War 2. He played for the Knicks and the Huskies in that first BAA season. He went on to become an attorney, and later moved from Brooklyn to Miami, and eventually to Las Vegas, where he died in 2009 at 86 years of age.

He was married to Eileen in 1951 and they had a son, Steven.

Stats:
http://www.basketball-reference.com/players/m/militna01.html
http://www.justsportsstats.com/basketballstatsindex.php?player_id=militna01
Posted by Peach Basket Society at 11:16 AM