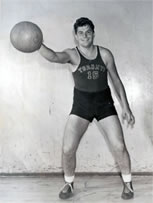 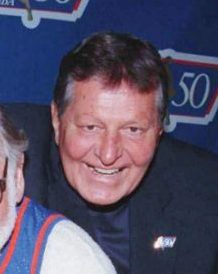 Born in Brooklyn to Benjamin and Estella Miller, Miller went to Seton Hall Prep in New Jersey before going to college. After serving his country in the USMC during World War 2, he signed with the Toronto Huskies and played in the first BAA game. He played a few more seasons of minor league basketball after that. He later coached the game at the high school and college levels, and was also the longtime physical education dierector at the Clelian Heights School for Exceptional Children in Greensburg, Pennsylvania.

I cannot find any evidence he played college ball at Seton Hall yet (he does not appear on their all-time roster.)

He was married to Harry Lechman for 37 years and had two sons.

Stats:
http://www.basketball-reference.com/players/m/milleha01.html
http://www.justsportsstats.com/basketballstatsindex.php?player_id=milleha01
Posted by Peach Basket Society at 5:00 AM