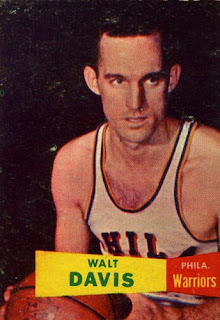 At the age of nine, Davis was stricken with polio and unable to walk for three years. He would eventually recover and become a star athlete at Nederland HS. Playing basketball and competing on the track and field team, he would get an athletic scholarship at Texas A&M, where he competed in both sports. After graduating in 1952, he would be selected by the Philadelphia Warriors in the 1952 NBA Draft, but before starting a basketball career, Davis would win a gold medal in the high jump in the 1952 Olympic Games in Helsinki, Finland. He decided against pursuing a basketball career, focusing on high jumping in the AAU with Ada Oil Company in Houston. Over the year with Ada, he desired to be the first athlete to achieve a 7-foot high jump. He managed to set the World Record in June of 1953 at 6 feet, 11 1/2 inches. Come September, he decided to enter the NBA with the Warriors without attaining that 7-foot jump he had chased.
Davis played 68 games for the Warriors in the 1953-54 season, the beginning of a five-year stretch in the NBA. A solid and physical player, Davis played with Warriors until being traded on January 19, 1958, to the St. Louis Hawks. He finished the season with the Hawks, and was resigned the summer, but in early October decided to retire just two games into the preseason exhibition games. He returned to Nederland to focus on his insurance business.

Posted by Peach Basket Society at 9:57 AM