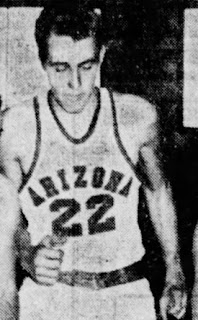 Uplinger was a well-known basketball star around Los Angeles, starring at Marshall HS in LA before enrolling at Los Angeles City College. In February of 1948, Uplinger was declared academically ineligible at LACC, so he joined the AAU team out of Hollywood that was sponsored by 20th Century Fox. He would transfer that summer to the University of Arizona, but had to leave school in late December of 1948 due to illness and returned to Los Angeles. He returned to LACC and returned to the court with them in late January of 1949. He stayed at LACC until 1950, when he was lured to LIU by coach Clair Bee. He would graduate from LIU and came back to Los Angeles.


Uplinger entered the U.S. Navy and played for the Los Alamitos Naval Base team, which would also participate in the AAU tournament. He garnered the attention of his former coach, Clair Bee, who brought Uplinger to the Baltimore Bullets in the NBA, who he was now the head coach of. He played in 23 games with the Bullets, scoring only 3.7 points per game.

After leaving the Bullets, he would work for CBS in Los Angeles and New York, eventually becoming the sports producer for CBS Television. He was instrumental in the development of instant reply in sports television production. His expertise in sports production allowed him to be the producer for the American portion of Live Aid in 1985. Hal died of bone cancer in 2011.

Posted by Peach Basket Society at 6:42 AM