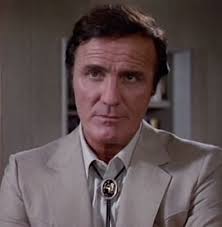 Born in East Harlem, Luisi would graduate from Franklin HS in New York and attended St. Francis College in Brooklyn after graduating. He was drafted by the Boston Celtics in the 1951 NBA Draft, but entered the U.S. Army and was stationed in Iceland. After the war, he returned to States to find his rights had been traded to the New York Knicks and then to the Baltimore Bullets, where he would play one season. He decided to pursue a career in the arts, attending the American Academy of Dramatic Arts. He would appear in many Broadway productions throughout the 1960's before relocating to California. He would appear in various movies and TV shows in the 70's and 80's, probably best known for his portrayal of Lt. Doug Chapman on "The Rockford Files" and his Emmy-nominated turn as George Washington in the 1975 miniseries 'First Ladies Diaries: Martha Washington."

Luisi continued working as a respected character actor through the 80's and 90's before dying of cancer in 2002.

Jim married Georgia Phillips in 1961 and they had one daughter.