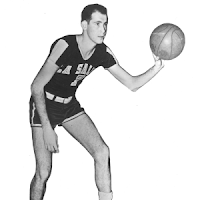 Norm Grekin grew up in Philadelphia, but never played basketball until he was approached by his junior high school coach who asked the over-six-foot-tall 14 year old to try out for the school team. With his height and natural athletic ability, he took to the game quickly. He would attend West Philly HS where he was named All-Public. He would play at La Salle, sharing MVP honors for the NIT with fellow Philadelphian Tom Gola. 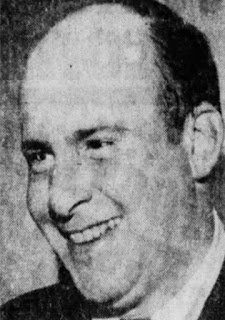 Grekin was drafted by the Philadelphia Warriors in 1953 and played one minute for the Warriors on opening night in 1953, scoring no points. He was released a short time later. He would leave basketball behind, working in the insurance industry and becoming regional director for Pilot Life Insurance. He also operated Cuyuga 30 Restaurant in Wayne, Pennsylvania, with his brother-in-law. He died of a heart attack in 1981 at the age of 51.

Grekin had one son and one daughter.

Posted by Peach Basket Society at 9:10 AM