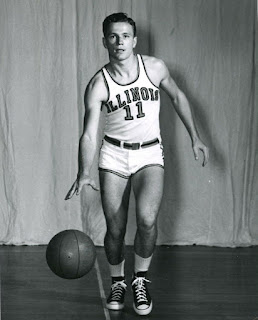 Born in Illinois, Sunderlage's father Alfred died suddenly when Don was 2 years old. Don would grow up to play basketball at Elgin HS and then the University of Illinois. He helped the Illini to the 1951 NCAA Championship. He was drafted by the Philadelphia Warriors in the 1951 NBA Draft, but military service delayed the start of his professional basketball career. He finally settled with the Milwaukee Hawks, and in his rookie season of 1953-54 scored 11.2 points per game and was named to the All-Star team. In September of 1954, Sunderlage was traded to the Lakers for Pep Saul. His playing time diminished quickly with the Lakers and he was released on February 3, 1955. He returned to Elgin where he would work at an insurance firm.

In July of 1961, Don and his wife Mary were driving in a terrible thunderstorm near Lake Geneva, Wisconsin, when their car collided with another, killing both Don and Mary. They left behind a 18-month old son.

Posted by Peach Basket Society at 11:01 AM