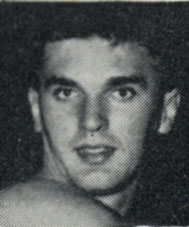 Swanson was a two-time All-American while at the University of Detroit, leading the Missouri Valley Conference in scoring twice. He was drafted by the Rochester Royals, playing in 63 games in 1953-54. After leaving the Royals, he would work for 43 years for the Stroh's Brewery in Detroit, becoming Vice President of Sales.

Norm and his first wife, Catherine (d. 1968) had two daughters and one son. In 1974, he remarried to Mary, who died three months before he did.