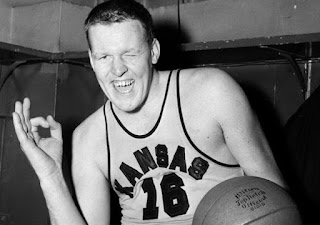 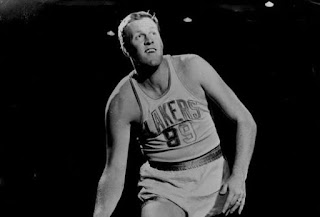 Standing at 6-foot-9 and weighing in at 245 pounds, came out of Indiana to star on the courts at the University of Kansas. Leading Kansas to an NCAA title in 1952, Lovellette set the record for most points in a NCAA tourney (141) and most points in a single game (44).  He had lead the country in scoring that year with 28.4 points per game, becoming the first (and as of this writing, the only) collegiate player to lead the nation in scoring AND win the NCAA tournament in the same year. 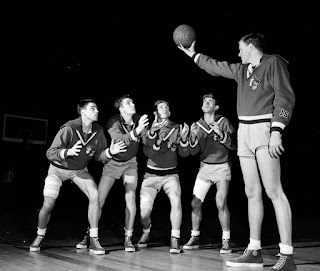 Lovellette was drafted by the Minneapolis Lakers in the first round of the 1952 draft, but he wanted to play in the Olympics in Helsinki. The U.S. team rolled to the gold medal, and Clyde joined the Lakers a year later. Somewhat rusty, Lovellette played n every Laker game in that rookie year of 1953-54, but only averaged 8.2 points. After that season, though, he was an unstoppable force. With a hook shot with a soft touch, he would average over 20 points a game the next three seasons as well as pulling in over 12 rebounds a game. Being named to two All-Star games, Lovellette was traded after the 1956-57 season to Rochester. The Royals moved to Cincinnati prior to the start of the 1957-58 season, and in his only season in Cincy, he scored a career-high 23.4 points per game in an injury-shortend season.

In September of 1958, Lovellette was sent to the St. Louis Hawks to complete a deal a month earlier where the the Hawks gave the signing rights of five young players to Cincinnati. (Of those five, only two, Wayne Embry and Jim Palmer, would play in an NBA game.)  Lovellette played four seasons in St. Louis, averaging almost 20 points over that stretch and being named to the All-Star team two more times. 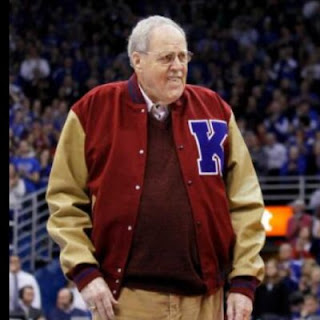 After the 1961-62 season, the 32-year old Lovellette was sold to the Boston Celtics. He would pick up his second and third rings in his two seasons there before retiring after the 1963-64 season. He was a tough and very physical player, not afraid to push, shove or elbow his opponents as he battled for position. He frustrated many an opposing player with his style of play, earning respect as well as controversy along the way.

After his playing days, he worked as a cattle rancher, country club manager, sheriff and teacher but was most proud of his days as a counselor for troubled youths in his home town of Terre Haute. He would be elected to both the Naismith Hall of Fame and the College Basketball Hall of Fame. He died in 2016 at 86 years of age.

Lovellette was married to Sally Wheeler and the had three daughters. After divorcing Sally, he remarried to Judy Wray in 1970.

Posted by Peach Basket Society at 4:38 AM