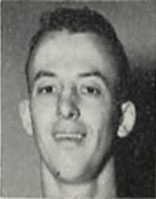 Ed Smith was a athlete and scholar from Columbus. Aside from playing basketball, football and baseball at Grandview HS, he also graduated at the head of his class, earning admission into Harvard. Smith was the first baseman on the Harvard baseball team as well as a high scorer on the basketball team. He was the captain of the basketball team at Harvard in his senior year but broke his leg in December of 1950, Smith was drafted by the New York Knicks in the 1951 NBA Draft but wound up in the U.S. Army instead, stationed at Fort Knox in Kentucky. After the Korean War, he was discharged and joined the Knicks. He would play in 11 games for the Knicks before being let go.

Posted by Peach Basket Society at 7:48 AM