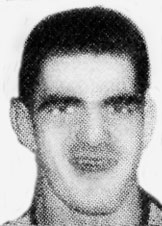 Smyth graduated from Niagara and went straight into the military. After serving his country, he returned to the USA and was drafted by the New York Knicks in the 1953 Draft. He would play for the Washington Generals before joining the Knicks in the beginning of January, 1954. Smyth played in 8 games with the Knicks before being sold to the Baltimore Bullets on January 22, 1954. He finished the season with the Bullets but was released by the club before the start of the 1954-55 season.

Posted by Peach Basket Society at 8:24 AM