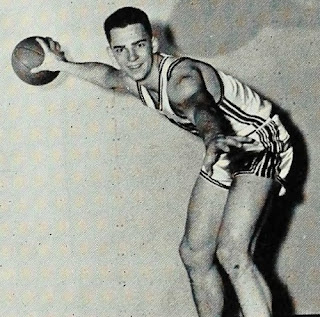 
Dyker, a prep star at St. Patrick, went on to De Paul where quickly became an important part of the team. The 6'6 center was one of the top scorers on the team in 1951-52, but was ruled ineligible for his senior season in September of 1952. He tried out for the Milwaukee Hawks of the NBA in the fall of 1953, but did not make the team. However, in December of that year, he would sign with the club to take the place of Bob Peterson. He played in 11 games for the Hawks before being released at the end of the month, scoring 16 points in limited play. Dyker also played basketball for the Toledo Mercuries, who toured with the Harlem Globetrotters.

Gene married Margaret Keane and they had three sons and two daughters.

Posted by Peach Basket Society at 4:14 AM

Email ThisBlogThis!Share to TwitterShare to FacebookShare to Pinterest
Labels: 1953-54, Milwaukee Hawks, under 50