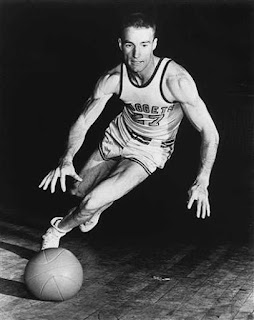 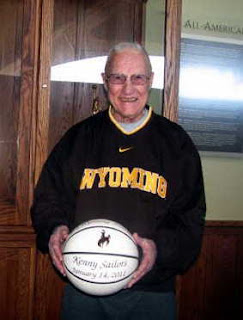 Born in Nebraska to Edward and Cora Sailors, Kenny grew up on a farm in rural Wyoming. His parents divorced when Kenny was young, and he and his older brother, Bud, used to play basketball underneath a windmill on the farm when not working or at school. Sailors developed a jump shot during those games, which was in a time where basketball players never left their feet to shoot. His jump shot carried him to basketball stardom at Laramie HS, and on to the University of Wyoming where he lead the Cowboys to the 1943 NCAA championship. He entered the Marines follwing that season as World War 2 raged on. When conflict ended, he returned to Wyoming to finish his education, and then went on to play basketball professionally for 5 seasons.

Done with playing basketball, Sailors bought a ranch in Jackson Hole, Wyoming, and served on the Wyoming legislature. As a Republican, he ran twice unsuccessfully for one of Wyoming's congressional seats and once for the United States Senate. In 1965, Sailors and his wife moved to Alaska and stayed there 30 years, coaching and teaching. In 1995, they moved to Idaho, and after his wife's death from Alzheimer's Disease, he returned to Laramie, where he lived the remainder of his life. Sailors suffered a massive heart attack in December of 2015, and died the next month at 95 years of age.

There are around 8 players who lay claim to inventing the jump shot, it is Sailor's technique that is the most widely-use and recognizable jump shot compared to the others.

Stats:
http://www.basketball-reference.com/players/s/sailoke01.html
http://www.justsportsstats.com/basketballstatsindex.php?player_id=sailoke01
Posted by Peach Basket Society at 4:28 AM