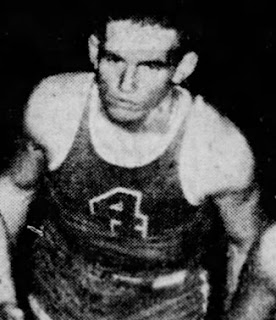 Bob was born to Sebastian and Marguerite. He went to Stonington HS, where he played football and basketball (despite having never played basketball before). He starred at URI and after graduating, he played with the Steamrollers, where he scored the first points against the Celtics in NBA history. Shea taught social studies back at Stonington for 35 years, retiring in 1984.

He married Elaine Cox on September 21, 1946, and they had one son and three daughters.


Stats:
http://www.basketball-reference.com/players/s/sheabo01.html
http://www.justsportsstats.com/basketballstatsindex.php?player_id=sheabo01
Posted by Peach Basket Society at 4:49 AM

Email ThisBlogThis!Share to TwitterShare to FacebookShare to Pinterest
Labels: 1946-47, over 90, Providence Steamrollers