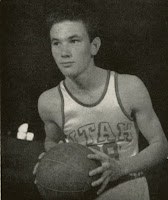 Born to Frederick and Lydia Sheffield in Laysville, Utah, Fred starred on the court and the track team at Davis High School before heading to the University of Utah where he lead the Utes to the 1944 Collegiate basketball championship. He had received a deferment from serving in the armed forces during World War 2 due to his status as a pre-med student. After Utah, Sheffield attended medical school at Temple and also played a year with the Warriors. He entered the U.S. Army and attained the rank of colonel and retired in 1969. Specializing in physical medicine and rehabilition and moved to Tustin, California, where he died in 2009.

He was married to Kari and had two daughters and a son.

Stats:
http://www.basketball-reference.com/players/s/shefffr01.html
http://www.justsportsstats.com/basketballstatsindex.php?player_id=shefffr01
Posted by Peach Basket Society at 11:20 AM